Gold Smuggling in India: A well-established phenomenon, an evolving threat

Precious metal smuggling involves the illicit transportation of valuable commodities such as gold and silver between continents, countries and provinces via air transport, usually with the aim of circumventing taxes and other restrictions on imports and exports. This enables criminals to re-sell imported items at a reduced price and/or recuperate the cost that would typically be paid to the state in the form of customs duty. Gold in particular is often smuggled from locations where it is extracted from the earth or is cheaper to purchase due to lower domestic taxes to countries where it is in higher demand and therefore where the price is greater.

Precious metal smuggling is not a recent phenomenon and has occurred via all forms of international transportation for centuries. However, the process of globalisation and a renewed focus on investment in dependable, internationally recognised commodities has led to the activity becoming increasingly prevalent in recent decades. It typically occurs in countries where there is a lot of rapidly accumulated wealth and an unstable local currency, which increases the appeal of alternative investments. The countries with the largest markets for gold and silver are India, China, the United States, the United Arab Emirates (UAE), Indonesia and Russia. Since the 1980s, India has emerged as the primary international centre for illicit gold imports, and the country has therefore attracted a steady flow of goods from Africa and the Middle East – particularly the Gulf states of Saudi Arabia and the UAE – where it can be purchased at reduced prices.

Gold smuggling via commercial and private flights into India is a long-established phenomenon that is driven by high domestic demand for the commodity. To understand the factors that drive this unparalleled level of demand, we must briefly take a look at the fascinating intersection of traditional cultural practices and contemporary economic forces that underpin the Indian gold market. For centuries the precious metal has played an important role in Indian culture as a symbol of wealth and status and remains a fundamental component of many ritual practices. In particular, the gifting of gold is an important element of marriage ceremonies, with offerings and dowries estimated to generate around 50% of all annual demand. Meanwhile, local economic activity is also often reinforced by an informal system of exchange that relies on gold reserves that can be rapidly turned into cash, services and other commodities, especially in times of emergency.

Since 2013, the illegal smuggling of gold into India to cater for this demand has seen a resurgence due to the central government rescinding its cap on customs duties, which significantly increased the costs associated with legitimate imports to the extent that prices are inflated by around 20% per ounce in tax alone. This has increased the amount of profit that smugglers stand to make by selling illegally acquired gold that has been imported duty-free. According to the Canadian monitoring group IMPACT, between 20% and 33% of all gold sold in India annually (around 225 tonnes) has arrived via illegal channels. In most cases, smuggled gold reaches the country via flights from the UAE, which accounts for 75% of both illegal and legitimate imports. However, overland smuggling via India’s eastern border is also a major concern for local administrations.

The COVID-19 pandemic, and its influence on the economy, appears to have also had a significant impact on the scale of precious metal smuggling as the price of gold has periodically risen since the pandemic began. Other factors are also likely to have contributed to the increase in smuggling, including a rise in customs duty costs and the decline in value of the Indian rupee against the US dollar. Meanwhile, the issue was also catapulted into the mainstream news cycle in July 2020 when India’s Central Board of Indirect Taxes and Customs uncovered a high-level plot to smuggle gold into the country via diplomatic channels with the UAE. 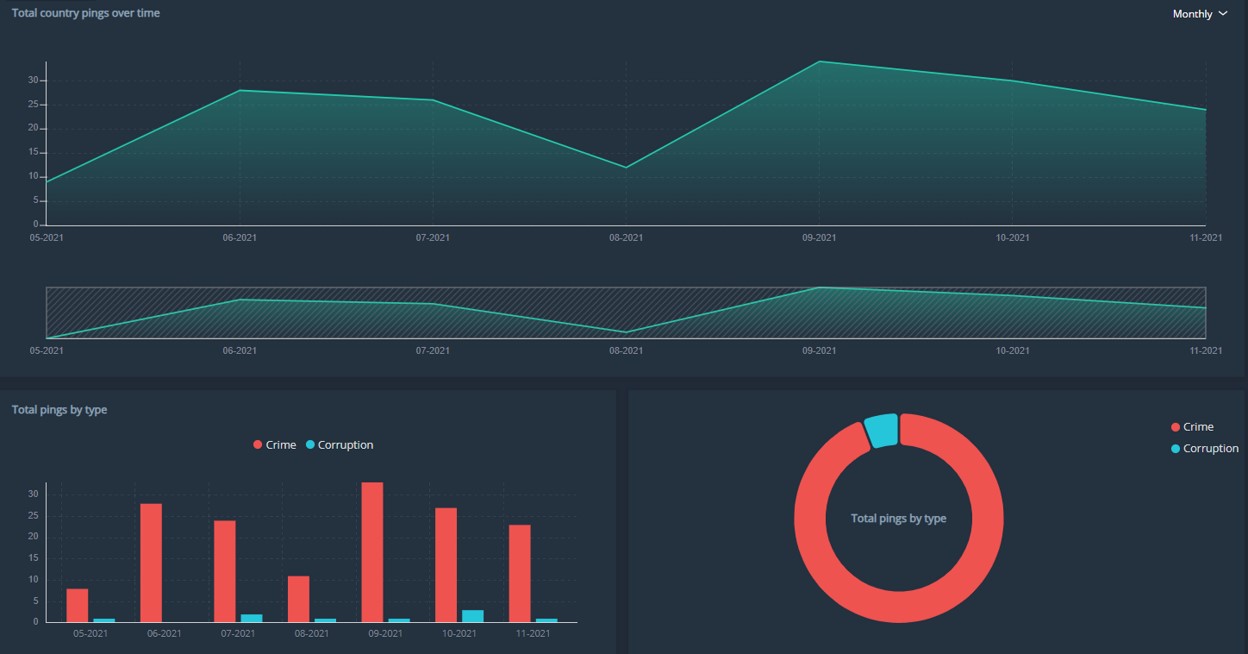 Osprey:Explore chart showing crime and corruption in India over the past six months

The vast majority of illegally acquired gold that arrives in India passes through international airports located in the Gulf States, which represent a major global hub for the illicit trade of precious metals. The UAE in particular has established itself as one the largest and fastest-growing marketplaces for the legitimate trade of gold and silver. According to Dubai’s Customs Department, gold has risen to become the emirate’s highest value external trade item, ahead of mobile phones, jewellery and diamonds, and is also the country’s second most important export, after oil. In many cases, the commodities are sourced from African nations like Zimbabwe where large amounts of gold and silver are illegally mined.

Precious metals are typically imported illegally via air cargo and courier services; however, they are also concealed in passengers’ luggage and on their person on flights between the UAE and India at a very high rate. Indeed, in October 2021 alone the Osprey team logged 22 significant gold seizures at Indian airports. A range of different techniques are used in order to disguise the items and evade detection by customs and border staff. In most cases this involves hiding the contraband among other items, within personal effects, or inside the body.

Precious metal smuggling is often facilitated by corruption among customs screening staff, airport workers and even law enforcement officers. In some cases, individuals with airside access are utilised to pick up contraband from passengers (and vice versa) either side of customs checks, thereby avoiding the screening process. Security officials and customs and border staff at airports across India have been implicated in gold-smuggling activity with some frequency. The involvement of corrupt aviation personnel is a significant concern from an aviation security perspective, the risk of which is increased by recent layoffs and financial vulnerability amongst members of staff amid the pandemic. In some cases, smugglers are likely having direct interaction with employees at airport facilities, which is also a concerning development from a personnel and landside security perspective. Customs officials at several major international airports and members of Air India and Singapore Airport Terminal Services (AISATS) have frequently been implicated in helping smugglers to evade routine customs checks upon arrival in the country. In some cases, these individuals have been found to have handled illegally transported gold on behalf of criminal organisations whilst also coordinating pick-ups and drop-offs on airport premises.

At Osprey Flight Solutions, we have recorded and tracked fluctuations in the rate of gold smuggling at airports in India throughout the COVID-19 pandemic. The imposition of a blanket ban on international flights that came into effect in March 2020 to minimise the spread of the virus precipitated a sharp decline in passenger footfall, which freed up police and customs resources and reduced the capacity for criminal organisations to recruit potential traffickers. However, these pervasive restrictions have since been progressively lifted through the establishment of bilateral travel corridors, culminating in the eventual resumption of scheduled passenger flights from 99 different locations earlier this month. This is likely to precipitate yet another dramatic change in the operating environment over the coming months as criminals seize the opportunity to transport additional goods and security resources are stretched more thinly. It is therefore particularly important that stakeholders with operations in India continue to monitor this threat and are cognisant of the potential disruption that may be caused.