The use of illegal flights to traffic narcotics through South American countries’ airspace and territory is a well-established phenomenon, which remains a serious concern from aviation security and safety perspectives. Given the clandestine nature of narcotics-trafficking flights, pilots involved in such activity are unlikely to use transponders, maintain ATC radio contact or file flight plans. Additionally, such flights contribute to the global illegal drug trade, which has a detrimental impact on both individuals and society and is often linked to other types of illegal activity. Osprey Flight Solutions monitors illicit flight operations in the region as well as incidents of drug trafficking via commercial aviation from South American airports.

Illegal flights affect most of South America; Colombia, Peru and Bolivia are the world’s leading countries for cocaine production, and the majority of other countries in the region are used as transit points. From South America, there are several trafficking routes – via illegal flights, commercial passenger and cargo flights, maritime and land transport – to destinations in Central America (where it may be trafficked onward to North America), Europe and Africa.

Since February, there has been a notable increase in military air activity in South America, as shown in the Osprey:Explore graphs below.

Osprey:Explore graph showing air patrols and air intercepts by military and police forces in South America between 1 January and 30 June 2022

Osprey:Explore graph showing air and air defence activity by military and police forces in South America between 1 January and 30 June 2022

The majority of military air activity that has occurred in the region in the first six months of the year has occurred in Venezuela – as shown in the :Explore chart below. Between 1 January and 30 June, the National Bolivarian Armed Forces (FANB) claimed interdicting 18 drug-trafficking aircraft. Venezuela’s armed forces do not always specify the means for interdicting aircraft; some may have been destroyed on the ground during security operations targeting clandestine airstrips or through aerial encounters, which likely took place below FL260. Venezuela is among several countries in the region that have introduced policies to counter civil aviation flights involved in illicit activity, which in some instances include permitting shoot-downs and ‘neutralisations’ of civilian aircraft suspected of involvement in narcotics trafficking. Other countries in the region with air interdiction policies include Bolivia, Brazil, Colombia, Paraguay and Peru.

Generally, across the region, kinetic engagements remain rare and are typically used as a last resort; however, they do occur. Osprey issued an alert on an intercept carried out by the Brazilian Air Force (FAB) on 3 July in which an FAB light-attack aircraft fired an ‘arrest shot’ at a narcotics-trafficking aircraft conducting an illegal flight over Mato Grosso do Sul state, forcing the aircraft to land. While legal civil aviation flights are unlikely to be directly targeted via kinetic engagements, there remains a latent but credible risk of misidentification by military air and air-defence assets. 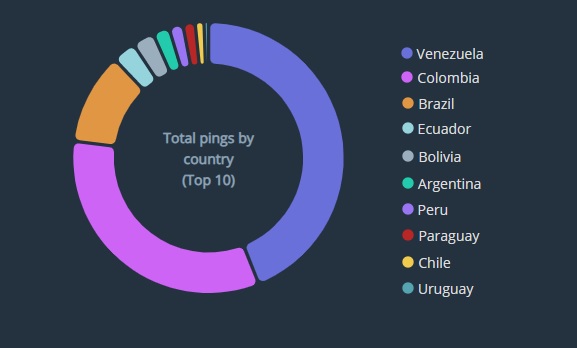 Other types of military air activity in the region

The use of illegal flights for drug trafficking has proved popular, particularly due to the prevalence of remote areas that can be used to create clandestine airstrips and the varying capability of countries in the Americas region to detect and track illegal flights, e.g., through the use of radar. As such, illegal flight operations, in addition to counter-narcotics operations by military and police forces in South America, are expected to persist; however, while activity levels were particularly high in May, Osprey data for July indicates that levels have returned roughly to those seen in February and March. Osprey will continue to monitor military air activity in the South America region and provide our clients with in-depth analysis and advice.

Isobel is an Aviation Security Analyst. In her role, she regularly researches and compiles alerts on a range of aviation security incidents and has a particular interest in narcotics trafficking using illegal flights and aviation-related cyber security incidents.

Prior to joining she was a Geopolitical Intelligence Analyst for a travel risk management company, where, in addition to this role, was part of a team that managed an airline safety database.

Isobel also holds a master’s degree in Security Management from the University of Portsmouth, which she obtained in 2019. For her dissertation, she conducted primary research into the development of performance measurements for Security Management Systems (SeMS) within the aviation sector.