Using Osprey:Explore to Assess Tensions Between Russia and Ukraine

Throughout April 2021, tensions have been rising between Ukraine and Russia over Russian military deployments into Crimea, as well as to Voronezh Oblast, Rostov Oblast and Krasnodar Krai, located adjacent to the eastern Ukrainian provinces of Donetsk and Luhansk. On 2 April, the Russian Ministry of Defence announced that the Southern Military District, which includes the Rostov, Krasnodar and Crimea areas, had initiated an exercise involving 15,000 personnel and 50 battalion-sized tactical groups, including electronic warfare (EW) units and air-defence batteries for counter-drone training. In addition, a supplemental ceasefire agreement above and beyond the ‘Minsk Protocol’, brokered by the Organization for Security and Co-operation in Europe (OSCE), expired on 1 April. Since that date, the OSCE has noted an increase in ceasefire violations in Donetsk and Luhansk provinces amid ongoing armed clashes between Ukrainian military forces and pro-Russian militias.

In the same timeframe, traditional media reporting on the situation in eastern Ukraine along the Ukrainian-Russian border and Crimea has increased significantly, some of which has overstated the size and scope of military activity occurring within these areas. Divisive public statements by officials from the Russian, Ukrainian and Western governments have also played a notable part in inflaming tensions. Osprey’s consistent collection of data on conflict zone dynamics and conventional military activity provides an objective view of the situation. The Osprey:Explore data visualisations, below, help to place the current situation in the context of historical reporting.

Osprey:Explore map showing activity locations between the end of March and the end of April 2021

Osprey:Explore chart showing activity in Russia and Ukraine between the end of March and the end of April 2021

The above visualisation shows activity in Russia and Ukraine over 30 days from the end of March to the end of April 2021. The data indicates that activity significantly increased in late March and early April, though daily totals are experiencing a gradual downward trend since an observed single-day high on 2 April. 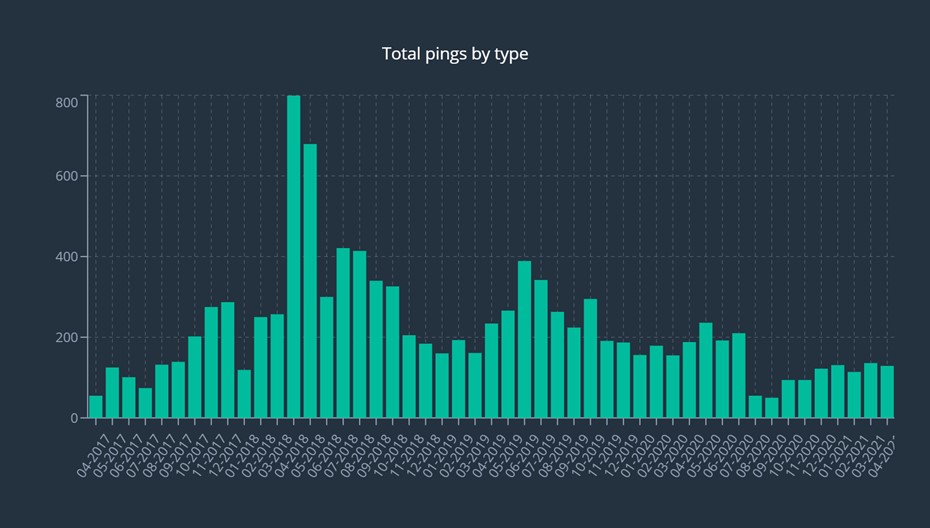 Osprey:Explore chart showing rocket, mortar and artillery fire in eastern Ukraine between 2017 and 2021

The above visualisation shows rocket, mortar and artillery fire in eastern Ukraine between April 2017 and April 2021. The data indicates that such activity in March-April is in line with the previous six months of collection and well below levels observed from late 2017 through early 2020. 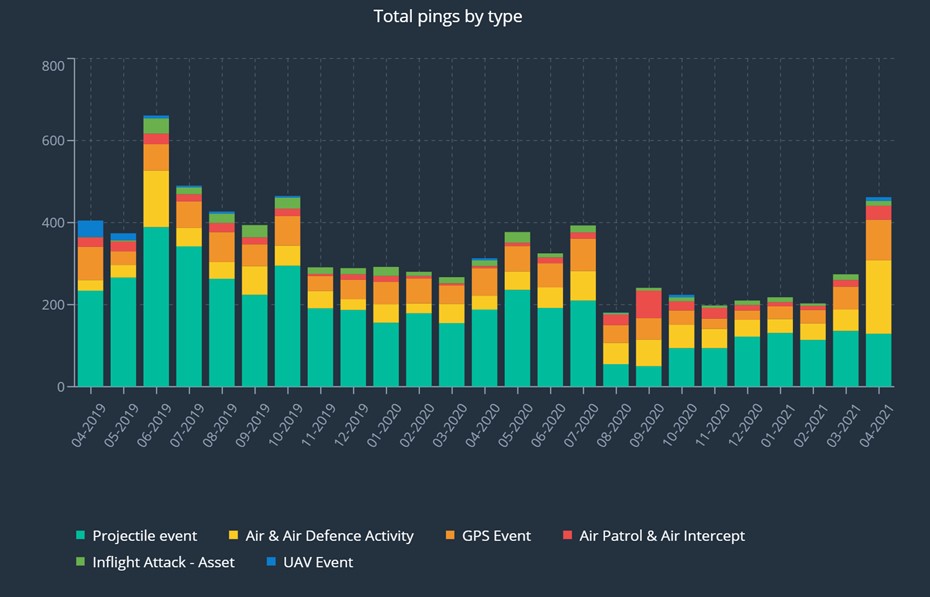 The above visualisation represents conventional military activity and conflict zone dynamics within Ukraine between April 2019 and April 2021. The data indicates that such activity in March-April 2021 is elevated compared with the previous six months of collection but is below levels observed from 2019 through early 2020. 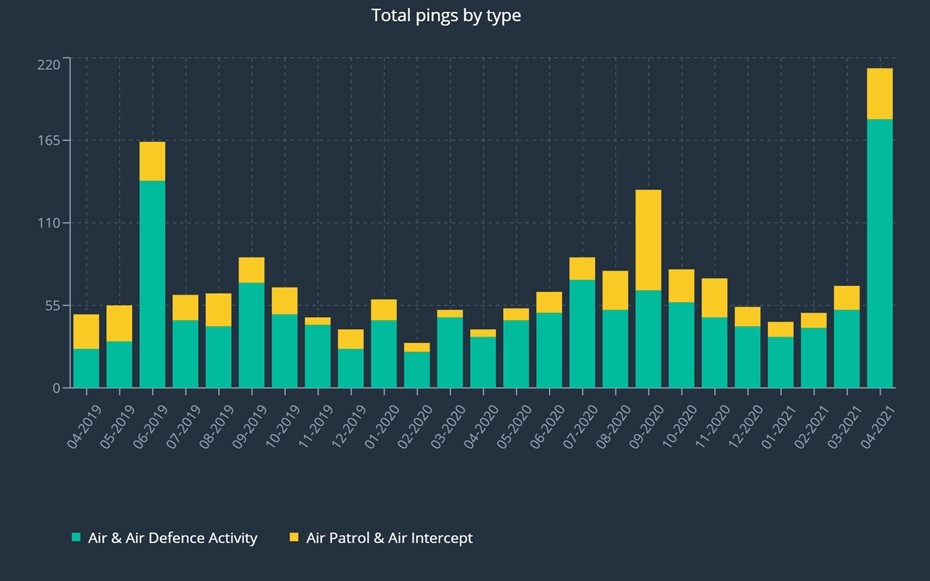 The above visualisation represents conventional military activity within Ukraine between April 2019 and April 2021. The data indicates that such activity in April is elevated compared with the previous six months, but the spike is not unprecedented as similar peaks occurred during individual months in 2019 and 2020. 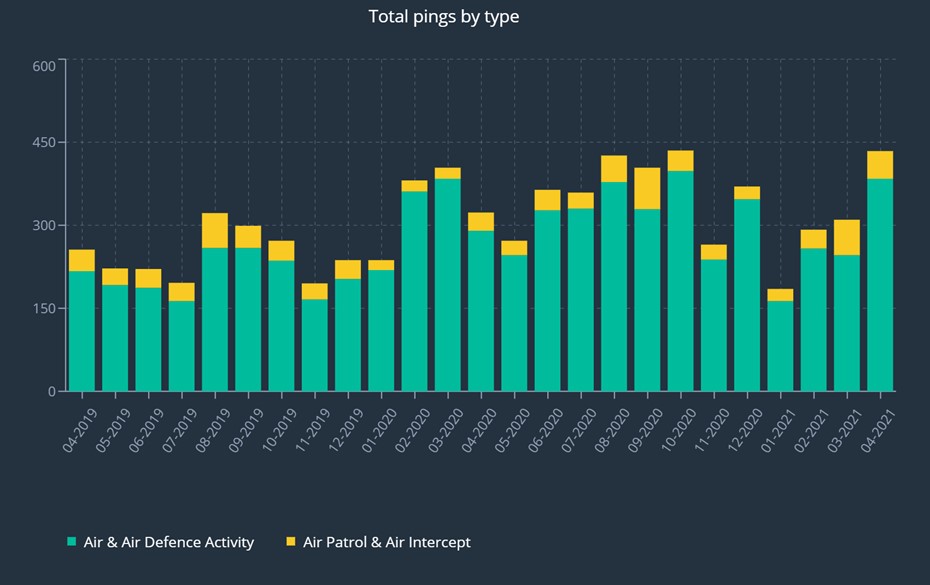 The above visualisation shows conventional military activity within Russia between April 2019 and April 2021. The data indicates that there has been a month-on-month increase in such activity in 2021, but the overall levels are within the mean since 2019. 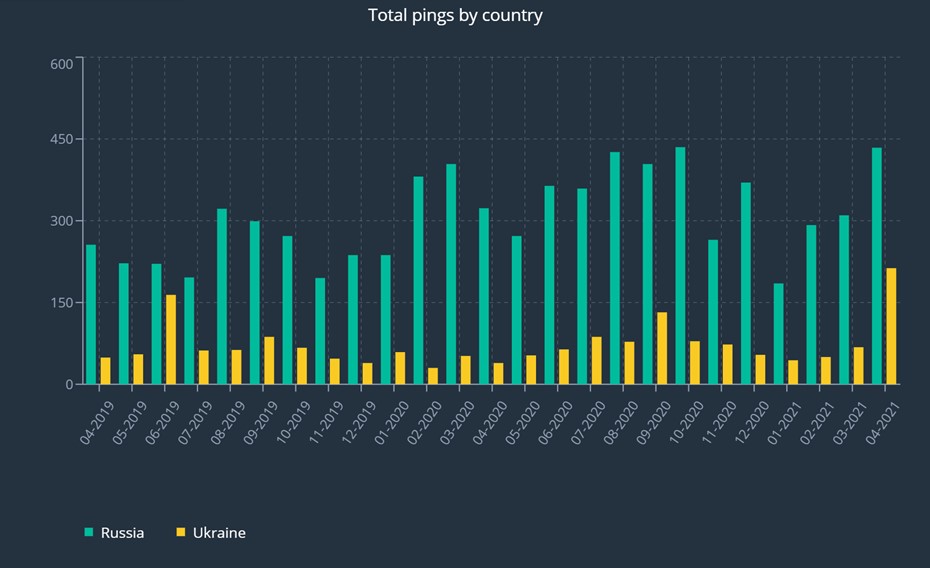 The above visualisation represents the combined conventional military activity of Russia and Ukraine over the past two years. The data indicates that there has been a month-on-month increase in such activity in 2021, but the overall levels are consistent with previously observed monthly levels since 2019.

While the true intentions of the Russians and the Ukrainians are opaque, Osprey Flight Solutions continues to view much of the activity as posturing by both sides and heightened levels of military training, and the airspace operational situation over portions of Ukraine, Russia and the Black Sea remain fluid and subject to rapid change. Russia has announced that exercises in the Southern Military District will end in the week ahead and that the majority of deployed units will return to their originating bases by 1 May. Ukraine has welcomed the announcement indicating a potential reduction in the border tensions. NATO stated it has taken note of the planned Russian end to military exercises near Ukraine and ‘remains vigilant’. The US has also said it is looking for ‘action’ on the claimed plan to end Russian military exercises near Ukraine.

Despite the above, some units deployed to the Central Military District areas, such as Voronezh near the border with Ukraine, will remain in place through autumn for the Zapad 2021 exercises, according to Russia. Osprey will continue to monitor Russian statements regarding the above exercises, as well as the associated redeployment of forces, and we will provide updates as the airspace risk environment over these areas evolves. 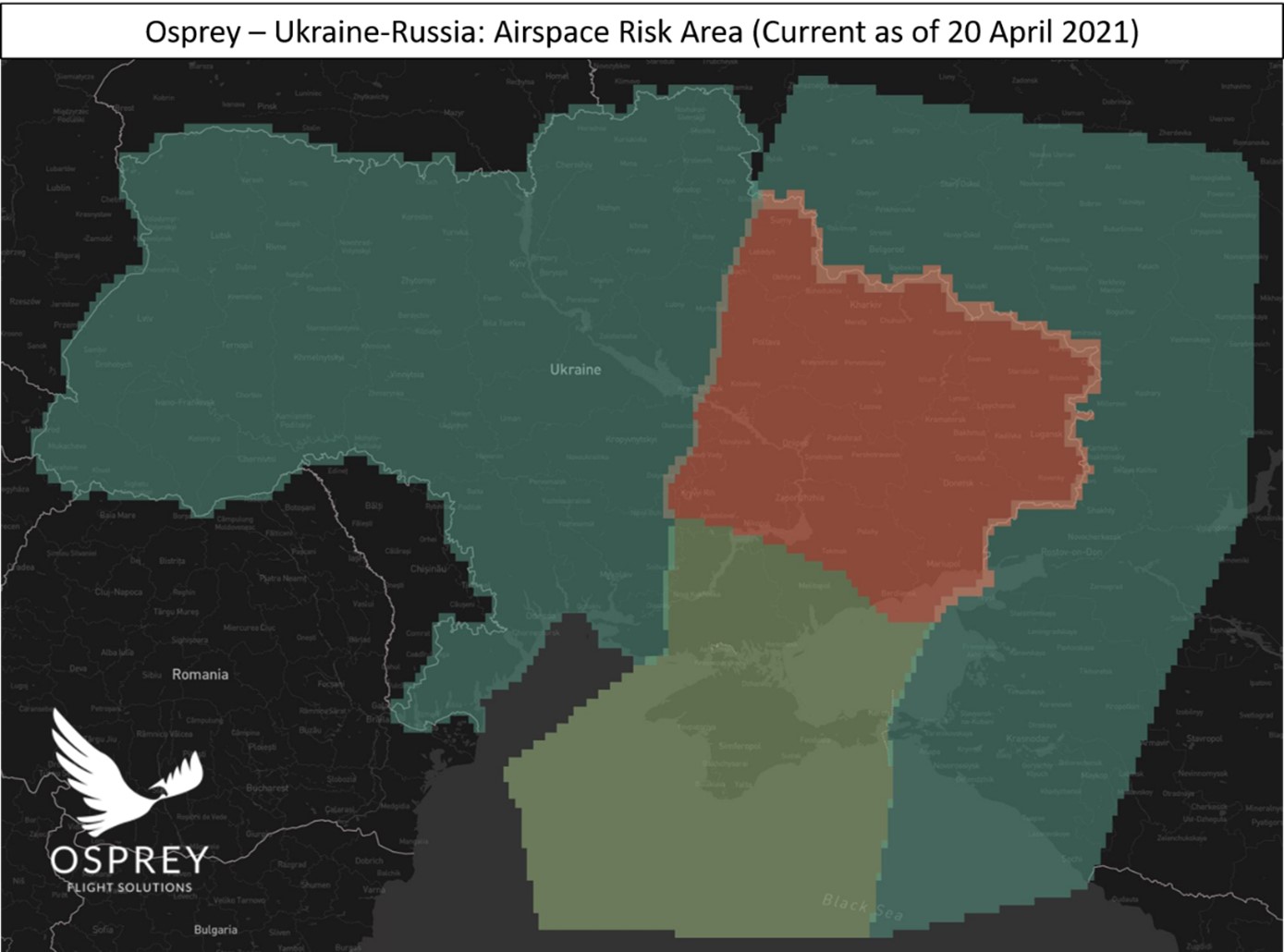 EASA, along with the US FAA, French DGAC, UK CAA and Transport Canada, have issued guidance to operators regarding use of portions of Ukrainian and/or Russian airspace.

As Head of Analysis, Mark is responsible for the day-to-day oversight of the Analysis team, as well as contributing to the analytical output across a wide variety of topics, with particular expertise in aviation terrorism.

Prior to joining, Mark worked for the UK government for over 18 years in a variety of roles in the security and intelligence spheres.

For the latter part of his government career, he was the senior aviation analyst responsible for providing assessments to the highest levels of the UK government on terrorist threats to aviation globally. As well as extensive cross-government cooperation, this also included engagement with military and commercial aviation entities in the UK and overseas governments on shared areas of aviation security concern.