In the past decade, there have been several bouts of armed clashes between Israel and Palestinian militant groups, including Hamas – the de facto authority of the Gaza Strip – and its military wing, the Izz ad-Din al-Qassam Brigades, the two most recent of which occurred in 2012 and 2014. Escalations in tensions between Israel and Palestinian militant groups frequently result in armed clashes, which can pose a risk to aviation operators using Israeli airspace and the country’s airports, including Tel Aviv’s Ben Gurion International Airport (LLBG/TLV). It should, however, be noted that rocket attacks emanating from the Gaza Strip or countering air-defence operations rarely affect Ben Gurion International Airport. This is largely due to the use of unguided rockets by militants, as well as the effectiveness of the Israel Defense Forces’ (IDF) Iron Dome air-defence system.

The current intensification of Israel-Gaza tensions has been rooted in widespread Palestinian violent social unrest in Jerusalem since mid April. Additionally, on 29 April, an announcement was made by the Palestinian Authority (PA) based in the West Bank, which indefinitely suspended elections in the Palestinian territories originally set for 22 May. The announcement was met with strong criticism from Gaza-based armed groups, including Hamas and the Palestinian Islamic Jihad (PIJ), who both blamed Israel for the situation. Osprey Flight Solutions issued five alerts in late April as tensions between Israel and Gaza-based Palestinian armed groups began rising over 23-26 & 29 April.

On 9 May, prior to the significant escalation in armed clashes between the IDF and Gaza-based Palestinian armed groups, Osprey raised its airspace risk level for southern Israel to HIGH at all altitudes and MODERATE at all altitudes for central Israel. This was immediately preceded by the Osprey system issuing multiple proactive notifications to our analysis team from 7-9 May. These are based on AI-enabled predictive data analytics and in these instances indicated that levels of conflict zone dynamics and conventional military activity within Israel had passed thresholds of historical norms. 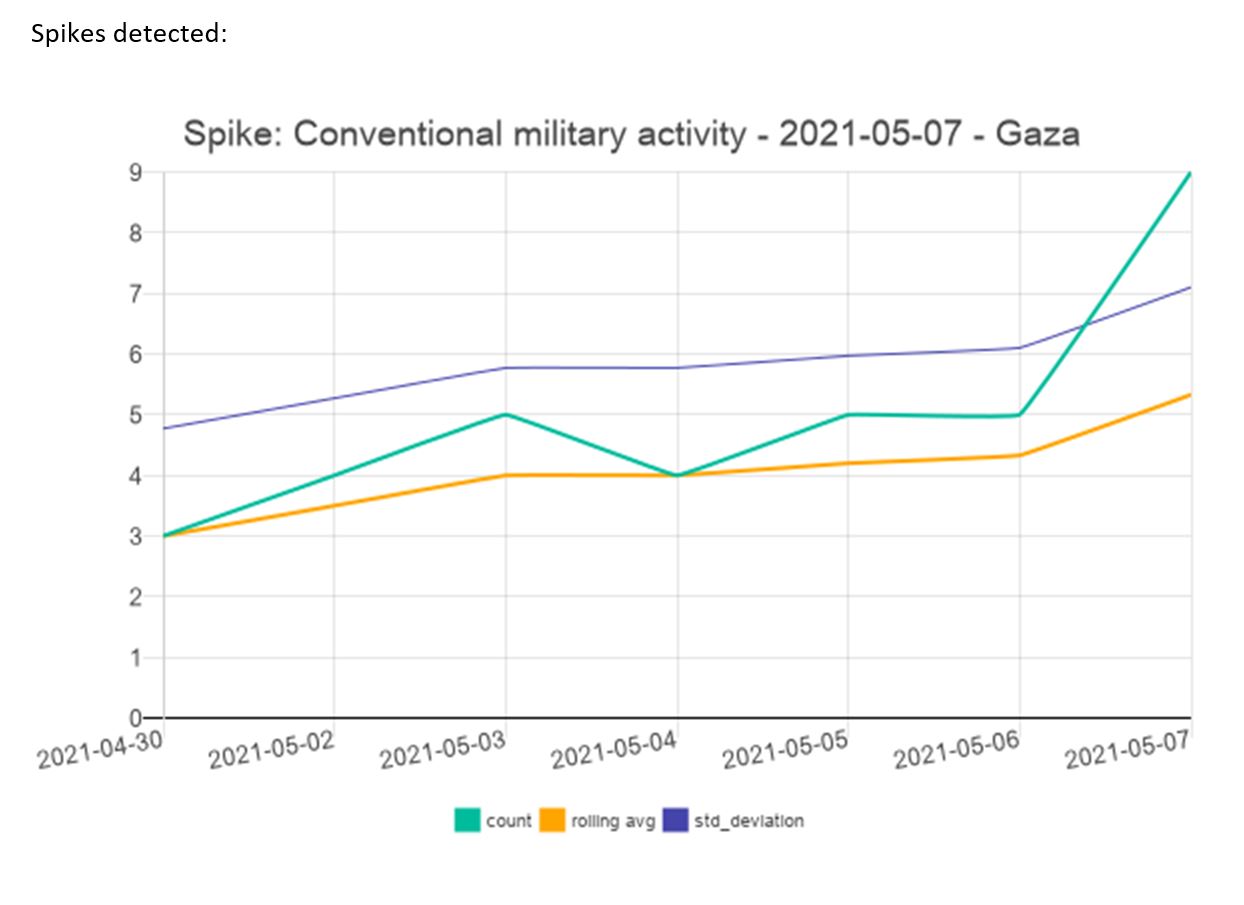 On 10 May, around 10 rockets targeted Jerusalem, several of which were shot down by Iron Dome systems over central Israel. Due to this event, Osprey raised its airspace risk level to HIGH at all altitudes for the entirety of Israel.

Since 10 May, several notable incidents have occurred within Israel, and Osprey Flight Solutions notified the industry of each. In total, 30 critical alerts were issued: 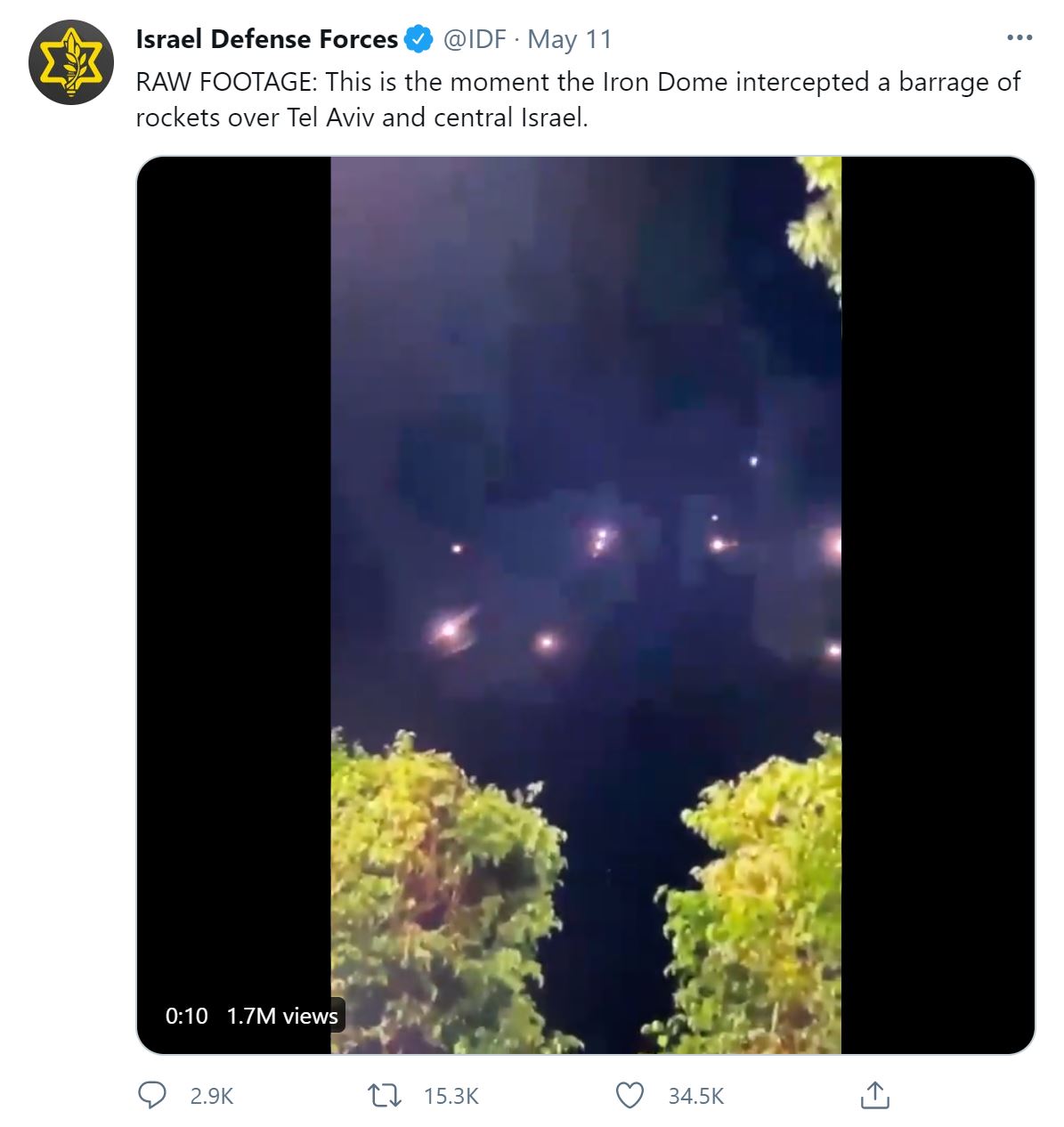 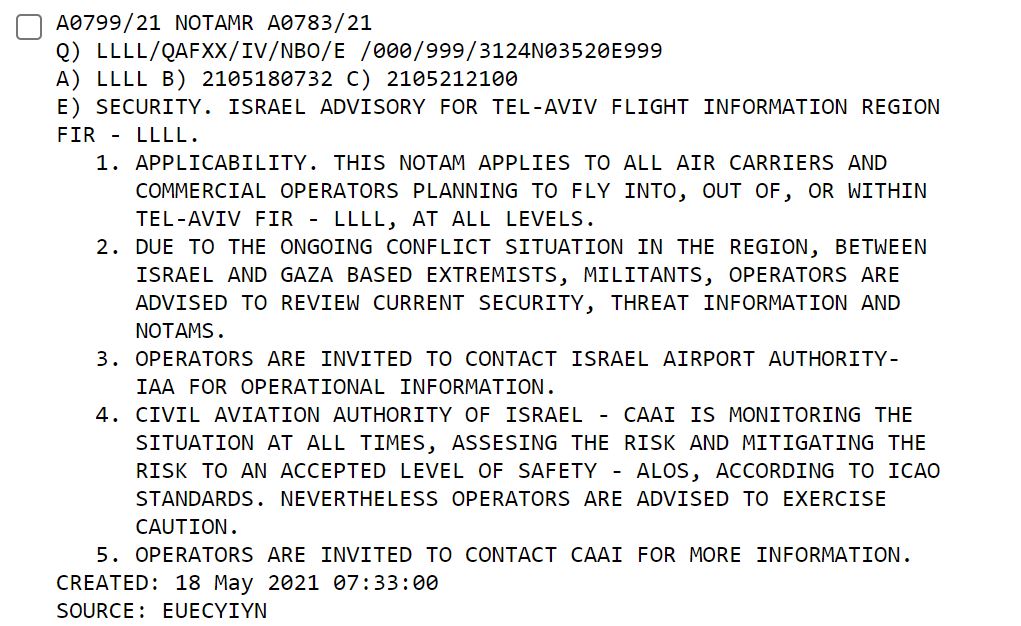 On 14 May, three rockets were fired from southwest Syria at the Israeli-occupied Golan Heights […] As a result of this, Osprey raised its airspace risk levels for the entirety of Israel to EXTREME at all altitudes.

From 10-20 May, dozens of barrages totalling over 4,500 rockets were launched from Gaza towards Israel, predominantly into Southern District within 32km (20 miles) of the border. Approximately 650 reportedly landed short of the border with Israel, within Gazan territory. Over 1,500 shoot-downs of rockets by Iron Dome systems occurred over Israel, predominantly in Southern District. For context, during significant escalation between Palestinian armed groups and the IDF in the summer of 2014, approximately 4,900 rockets were fired toward Israel from Gaza in 50 days. In this most recent round of conflict, that total was nearly equalled in just 11 days.

The IDF conducted approximately 2,000 air and artillery strikes into Gaza during the conflict. In a significant development, from 12-15 May, Palestinian armed groups reportedly launched several military-grade weaponised drones into southern Israel; at least five were shot down by IDF air & air-defence assets. In addition, since 12 May, IDF airstrikes have targeted multiple drone launch sites in Gaza.

The ceasefire holding over the past three plus days indicates that there is a significantly reduced potential for the resumption of armed clashes between the IDF and Gaza-based Palestinian armed groups in the near-term. The IDF has indicated that any rocket, drone and/or incendiary balloon launches from Gaza into Israel will elicit significant retaliatory strikes by the Israeli military. However, further instances of rocket fire and/or drone launches from southern Lebanon and/or southwest Syria at northern Israeli territory remain a credible scenario through May, whether or not the Gaza ceasefire continues to hold.

Osprey Flight Solutions will continue to monitor the situation and provide updates as the airspace environment over Israel evolves.

The incidents described above involving rocket and/or drone launches from southern Lebanon and/or southwest Syria at northern Israeli territory, along with the enduring Israel-Lebanon-Syria border tensions, despite the Israel-Gaza ceasefire, are highly concerning as they indicate the ongoing potential for the armed clashes to shift geographically. Such a scenario creates two separate fronts facing IDF air power and air defences, adding further complexity to deconfliction with civil aviation. Osprey Flight Solutions will continue to monitor the situation and provide updates as the airspace environment over Israel evolves.

Further instances of rocket fire from southern Lebanon and/or southwest Syria at northern Israeli territory remain a credible scenario throughout the week beginning 24 May, whether or not the ceasefire takes hold. We assess there is potential for limited follow-on sets of IDF air and/or artillery strikes into southern Lebanon and/or southwest Syria within the next week in response to rocket or drone launches at northern Israeli territory. We also assess there to be an enduring potential for unsafe air and air-defence activity on the Israel-Lebanon-Syria border in the near term, which is likely to negatively impact airspace safety and security in northern FIR Tel Aviv (LLLL).

Lebanese Hezbollah is assessed to have tactical conventional surface-to-air missile (SAM) systems capable above FL260 deployed in southern Lebanon, and the group previously claimed to have engaged Israeli military air assets via “anti-aircraft missiles” along the border on 3 February as well as in October 2019. The below table outlines the air defence weaponry the Hezbollah are reported to be in possession of:

The Assad regime military has routinely responded to IDF strikes in recent years by activating its conventional SAM systems, capable well above FL260, deployed in southwest Syria. Previously, the IDF confirmed that on 21 April, a Syrian Russian-made S-200 Vega (SA-5 GAMMON) conventional SAM was launched at an Israeli military combat aircraft operating on the Israel-Syria border area over the Golan Heights. The Syrian SA-5 missed the IDF fighter jet, and the missile exploded in flight with its debris impacting in Israel’s Negev Desert in the central area of FIR Tel Aviv (LLLL). The IDF confirmed that it launched an air-defence interceptor against the SA-5; however, it failed to shoot down the Syrian missile and detonated over the Negev Desert. The SA-5 is capable well above FL900 and out to 300km (190 miles). The below table outlines the air defence weaponry the Syrian military is reported to be in possession of:

IDF Iron Dome air-defence units are likely to be activated in response to any follow-on rocket and/or drone launches from Gaza, southern Lebanon and/or southwest Syria that threaten population centres in Israel. The IDF has several military airbases with combat aircraft, air-defence units with conventional SAMs, as well as electronic warfare (EW) systems capable well above FL260, operationally stationed in areas near the Israeli border with Gaza, as well as in central and northern Israel. IDF-operated US-made MIM-104 Patriots, as well as the indigenously produced Arrow and David’s Sling conventional SAM systems, are capable up to FL800 and out to 160km (100 miles). Such weapons in particular may be employed by the IDF to down drones launched from Gaza, southern Lebanon and/or southwest Syria. These conventional SAM systems can also be used to engage short-range ballistic missiles launched from southern Lebanon and/or southwest Syria, in the unlikely event such weapons are used. The below table outlines the air defence weaponry the Israeli military is reported to be in possession of:

Should the Israel-Gaza ceasefire falter and/or if tensions significantly escalate along the Israeli borders with Lebanon and/or Syria, more restrictive measures could be enacted at short notice by Israel, including full airspace and/or airport closures. If that occurs, operators should remain prepared for a loss of access to FIR Tel Aviv (LLLL) and/or disruption to flight schedules at Israeli airports. Osprey Flight Solutions recommends operators enact the following comprehensive risk mitigation measures for overflight of Israeli airspace: