The escalation in tensions between Armenia and Azerbaijan

The recent escalation in tensions between Armenia and Azerbaijan during July continue to pose a significant risk to civil aviation. The use of conventional surface-to-air missile (SAM) systems and the level of training of personnel with control of these systems indicates similar dynamics as those that have historically led to misidentification and subsequent shoot down of civilian airliners such as MH-17 and PS752.

Osprey’s open source data gathering, analytics and analysis capability identified this risk from an increase in conflict zone activity in the region. This allowed us to issue numerous alerts advising the industry of the risk almost a week prior to any national or international authority publishing a NOTAM.

Within hours of our second alert being issued, a number of operators altered their flight plans further north to avoid the risk area that we had identified. Osprey’s ability to identify risks and provide the industry with the information needed to avoid those risks in near-real time ensures the most comprehensive and fastest resource to understand the operating environment.

Since 12 July, the Armenian military and the Azeri armed forces have each conducted several volleys of artillery shelling and precision drone strikes in the Tovuz area of Azerbaijan and the Tavush area of Armenia, located along the northern portion of the border separating the two countries.

Armenia and Azerbaijan have been locked in a dispute over the Nagorno-Karabakh region along the southern border separating the two countries since the 1990s, with the most recent large-scale armed clashes between Armenian-backed rebel forces and the Azeri military taking place in the area in April 2016.

However, the current clashes are a significant escalation in the tensions between Azerbaijan and Armenia along the border, as the majority of the strikes have occurred directly between the Azeri armed forces and the Armenian military – not Armenian-backed rebels. In addition, the Tavush/Tovuz area of the Armenian-Azeri border is located approximately 100 miles (161 km) north of the centre of the disputed Nagorno-Karabakh region.

Both Armenia and Azerbaijan have military airbases with combat aircraft capable well above FL260 operationally stationed in areas near the border separating the two countries. Both Azerbaijan and Armenia have deployed variants of the Russian-made S-300 series conventional SAM system to locations within their respective borders for strategic air-defence coverage of the Nagorno-Karabakh area as well as areas further north. The most capable variants of the S-300 have the ability to engage aircraft at altitudes well above FL800 and at ranges out to 120 miles (193 km).

On 21 April, Armenian-backed rebel forces claimed to have downed an Azeri military Orbiter drone via Russian-made 9K33 Osa (SA-8 GECKO) conventional SAM system engagement over the disputed Nagorno-Karabakh region. On 28 April 2017 & 13 June 2019, Armenian-backed rebels employed SA-8 conventional SAM systems against Azeri Air Force aviation assets in-flight over the disputed Nagorno-Karabakh region, though no drones were downed. The most capable variant of the SA-8 has the capability to engage aircraft at altitudes up to FL450 and at ranges out to 9.3 miles (15 km). 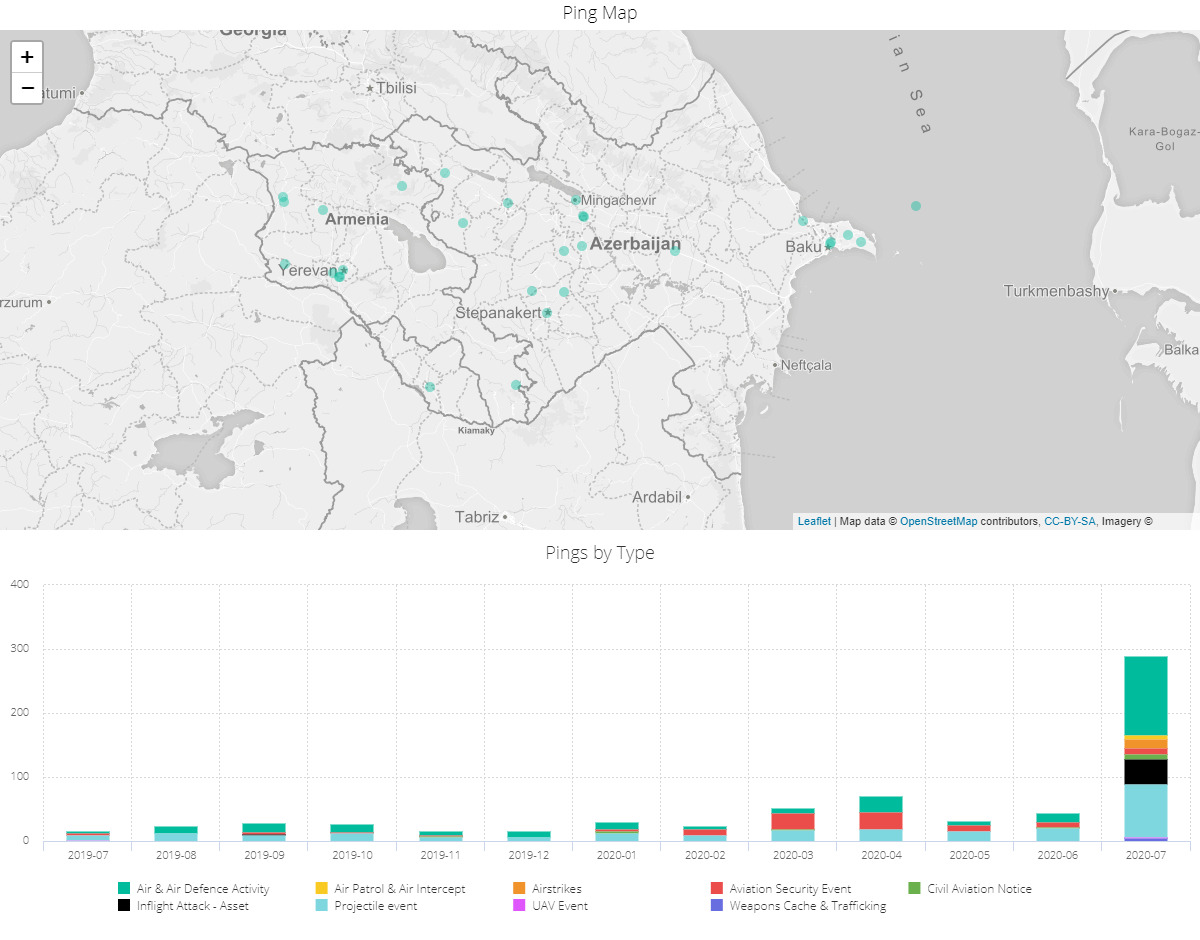 Osprey :Explore map and bar chart showing locations and frequency of conflict zone incidents in Armenia and Azerbaijan between July 2019 and July 2020

In total, the Azeri armed forces have claimed downing seven Armenian military drones over Tovuz and Nagorno-Karabakh since 12 July. Specifically, Azeri military SA-8 conventional SAM system use was reported on 22 & 30 July and SA-24 MANPADS employment was reported on 30 July as well.

A notice and publication for Azeri airspace remains in effect, prohibiting all forms of civil aviation activity within or over the Nagorno-Karabakh area due to the ongoing armed conflict situation (NOTAM UBBA A0024/11). In addition, on 21 July, Azerbaijan issued NOTAMs closing specific ATS routes in FIR Baku (UBBA) through 21 August as well as establishing an all-altitude temporary restricted area along the northern border with Armenia (UBBA A0083/20, A0084/20).

A now-expired French NOTAM – which had been in effect through 30 July – previously requested aviation operators registered in France not to enter Armenia’s FIR Yerevan (UDDD) east of 444500E and Azerbaijan’s FIR Baku (UBBA) west of 472000E except for specific ATS route segments outlined in the notice at or above FL340 (LFBB F1150/20).

German-issued NOTAMs valid through 17 August remain in effect for the airspace of Azerbaijan and Armenia due to the potential risk to aviation from military operations, including anti-aviation weaponry (EDGG B1280/20 UBBA & EDGG B1281/20 UDDD).

Osprey :Explore line graph showing conflict zone activity in Azerbaijan and Armenia between 1 and 30 July 2020 and the dates of Osprey alerts

Within hours of our second alert being issued, a number of operators altered their flight plans further north to avoid the risk area that we had identified. 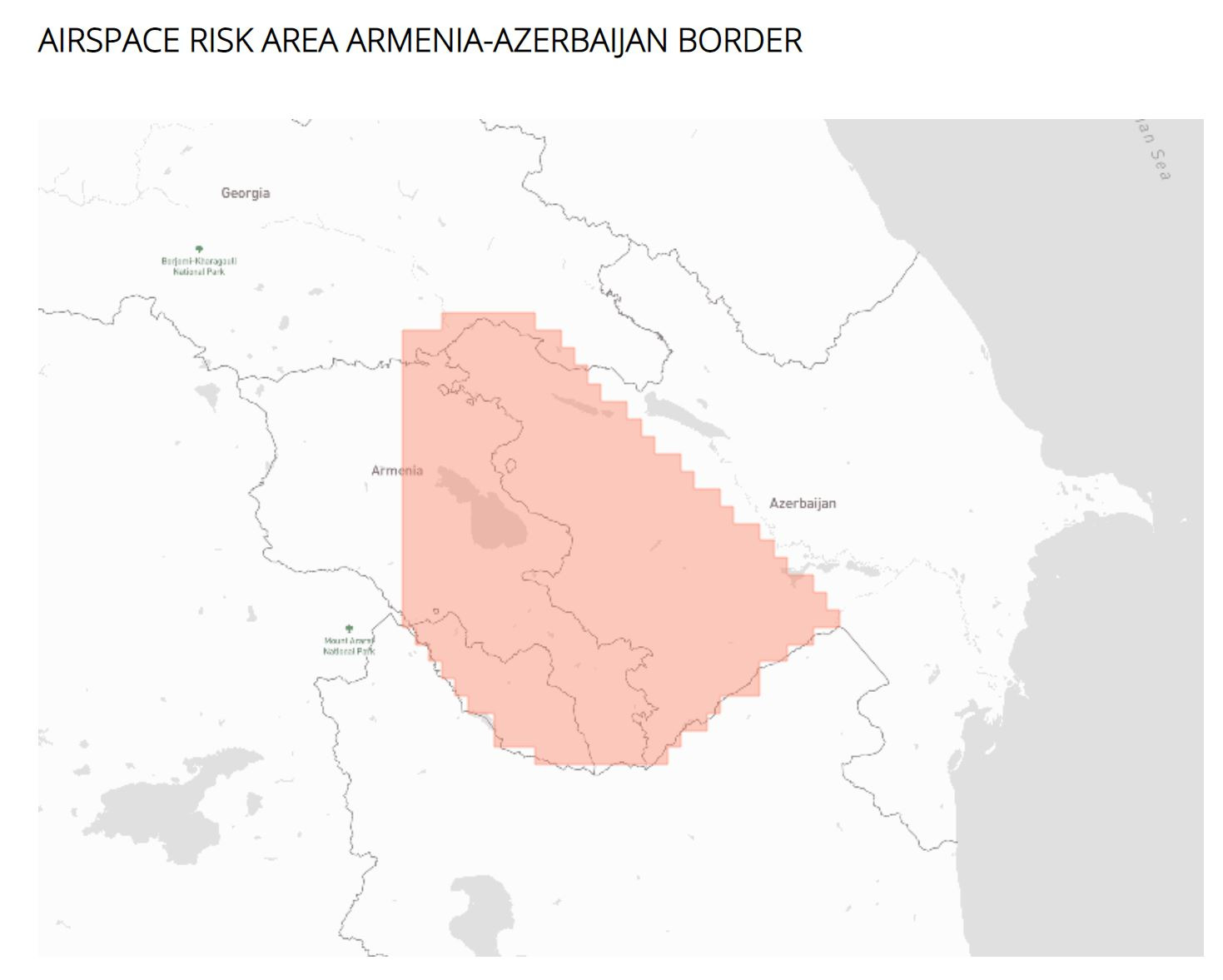 The Azeri NOTAMs issued on 21 July as well as the standing notice for Nagorno-Karabakh effectively limit overflight near the Armenia-Azerbaijan border to two ATS routes in the northwest of FIR Baku (UBBA) – M747 & M737. However, these ATS routes remain in close proximity to the current armed clashes between Armenia and Azerbaijan in the Tavush-Tovuz border area. The confirmed Armenian military & Azeri armed forces use conventional SAM systems to down each other’s drones in-flight over the Tavush-Tovuz border area is highly concerning in regards to M747 & M737 as these ATS routes remain negatively affected by such unsafe air & air defence activity.

Given the heightened levels of military activity on both sides of the Armenian-Azeri border and the disputed Nagorno-Karabakh region, we assess there is now an increased likelihood of further escalation in armed clashes between the factions through 21 August, most likely in Nagorno-Karabakh but also possibly further north along the border. Consequently, there remains a greater likelihood of short-notice airspace restrictions being enacted for Armenian and/or Azeri airspace during the first three weeks of August. Operators should remain prepared for at least a temporary loss of access to portions of FIR Yerevan (UDDD) and FIR Baku (UBBA) along the border areas separating the two countries should the armed clashes between Armenia and Azerbaijan continue to escalate.

There have been over 30 drones downed over the disputed Nagorno-Karabakh region and the Tavush-Tovuz northern border area since the start of 2017. The majority of the drones were reportedly operated by Armenian-backed rebel forces and were claimed to have been shot down by the Azeri military, primarily over Nagorno-Karabakh.

Due to the heightened levels of air & air defence activity by both the Armenian military and the Azeri armed forces in the Tavush-Tovuz area along with the enduring conflict zone environment in the disputed Nagorno-Karabakh region, we now assess the entirety of the Armenia-Azerbaijan border zone to be an EXTREME risk airspace environment at all altitudes.

Osprey will continue to monitor the situation closely and we will provide updates as the airspace risk environment along the Armenia-Azerbaijan border area evolves.